Prompted to blog to celebrate that I’m now an https – thanks to Callum for that.

And to celebrate Scotland’s win of 27-22 over Ireland. This is the first time Scotland has won their opening game of the 6 nations for 10 years. Wha Hae we go!

I have a helper in the shop who does meet and greet and security. What a team we make. 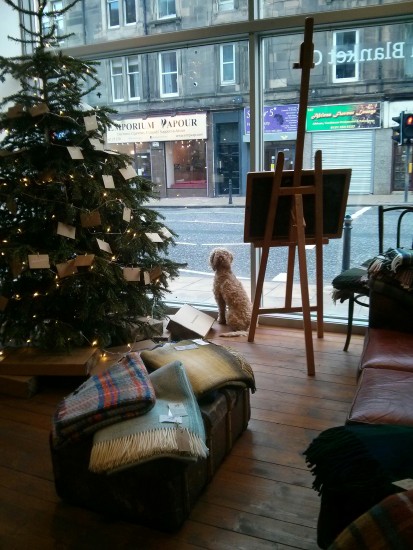 I’m working at the Tartan Blanket Co pop up shop – loving it. You can take the girl out of retail but you can’t take retail out of the girl!

Last day, cool and wet, so preparing me well for predicted 15 degrees in Glasgow. It’s a long haul, but at least Emirates airlines have great service, so it’s as good as it can be. I’m getting excited about seeing home and everyone again, but it may be a few days before I’m compos mentis again (if I ever was!).

Flew from Alice Springs to Melbourne (a short 2.4 hours) to arrive in their coldest spell for decades! Actual frost on the ground – I was surprised to see they water the garden after frost to prevent the veggies from freezing. Can’t see that working in Edinburgh! Had a great day in the city centre, fantastic shopping arcades (posh that is), and a giant Uniqlo, where I bought 2 merino cardigans – yes cardigans. Seemed like a good idea for Scotland too. Also went to a very interesting butcher shop in the local market – guess what we had for dinner that night? 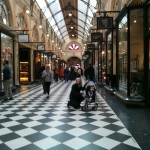 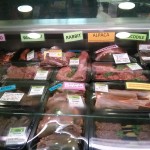 On Sunday we went to the botanics, on a very cold but sunny day (-1 overnight) and saw some very strange Australian plants and some familiar looking trees too. 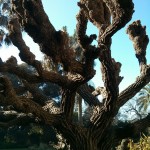 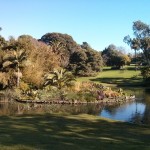 The first surprise is just how long it takes to get to Alice Springs – 3 hours 15 mins flying time from Brisbane. The temperature was a challenge too, 0 at night and up to 19 during the day. The second surprise is how far it is from Alice Springs to Uluru – about 450 km! So it was a long day in the bus, but with fantastic guides who were so knowledgeable about the area. First stop for photos was Mt Connor – or Foolaru as they call it because apparently lots of visitors stop and take this photo thinking it’s the big rock since it’s a big lump in the middle of a flat land. 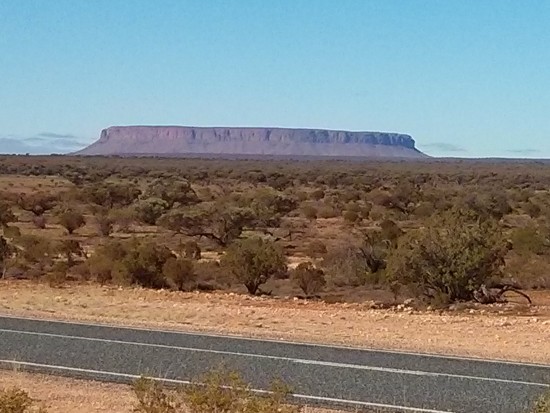 Our next stop was the Olgas, or Kata Tjuta in the local language. Gorgeously coloured lumps of rock which seem to just et bigger and bigger as you approach them. We did have the option of sprinting up a slope and back in 30 minutes max, but decided to look from ground level! 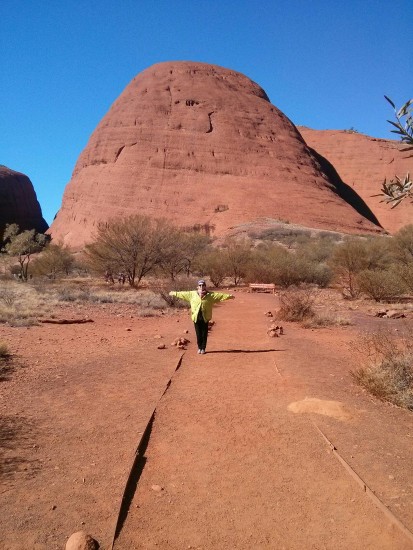 This is when you really see how red the earth is, though I was surprised how much vegetation there was as I’d imagined it to be pure sand desert. Apparently there’s a lot of underground water, and you know where the water is as it’s indicated by the straight trees (can’t remember which kind).
From there we headed to the main attraction, Uluru and we did several guided walks at points all around the rock. We heard how the indigenous people ask you not to climb the rock, but don’t forbid it, as that’s not in their culture. While we were there a helicopter had to rescue someone who had had a heart attack, not uncommon apparently. We stopped at a viewing point for our dinner – they unloaded a barbecue, chairs and food from the boot of the coach and we had sausages and champagne whilst sitting watching the sunset and the amazing change of colours that Uluru presents. We were not alone – about 10 coaches were parked in the same spot, but I managed to find a spot to grab a photo without anyone else in it. 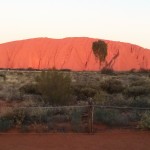 So a long day, 17 hours in total, but worth every minute.

Heading out to Alice Springs tomorrow (Sunday) for 4 days, including a trip to Uluru. Weather forecast predicts 0 – 15 but sunny. Hmm! Not too worried about the heat, then, more about how to keep warm. I’ve worn holes in the elbows of my biggest cardigan, but won’t let that stop me wearing it. South east Australia is currently predicted to have the coldest weather for 10 years, and I’m heading to Melbourne after Alice Springs, so it could be even colder there. Ah well, pretty soon home to scorching Edinbugh…. 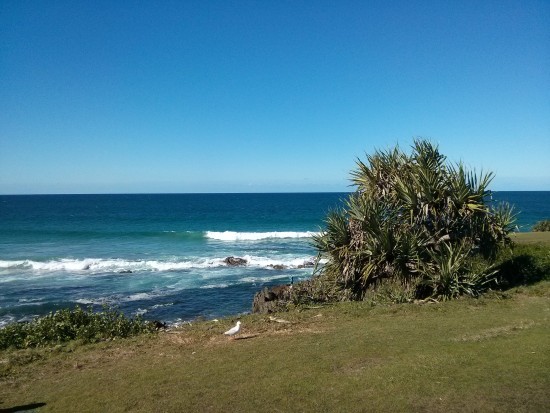 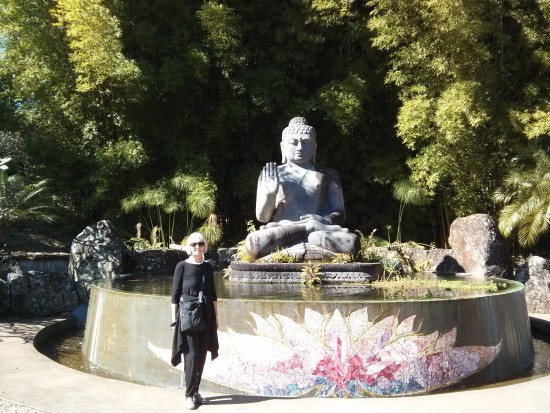 I’ve been whale spotting at Hastings Point on a beautiful clear day – but oh boy there’s a wind off that ocean. I saw a few spouts and a tail thrash down on the water, but haven’t yet seen the full out of the water breach.
I’ve also been to an RSL (Returned and Services League) club in Tweed Heads. I was thinking of the legion club in Inverurie where we used to go back in the day, so was mega surprised to see something resembling a corner of Las Vegas – sparkles and shine everywhere, plush carpets, live music, and of course hundreds of slot machines.
We had family and kids her for a few days, so we all went to Crystal Castle near Mullumbimby (love those names!) and saw slices of Amethyst in the original rock, taller than me.

This 310 k ball of rose quartz magically rotates on 3 mm of water without any motor or other device. German engineering of course!
There are labyrinths, Spirals, crystals, Eastern deities and a Kalachakra World Peace Stupa from the Tibetan Buddhist tradition, complete with revolving prayer wheels. Quelle surprise! (And no, it’s not falling over!) 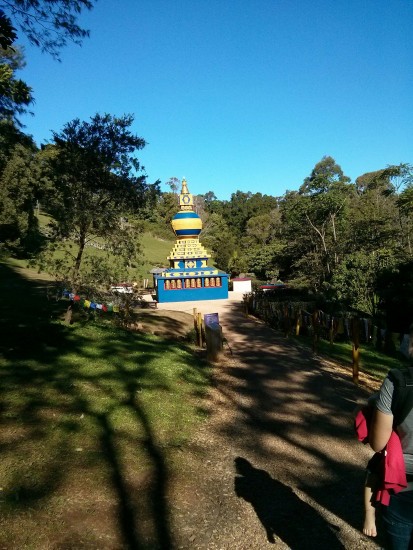 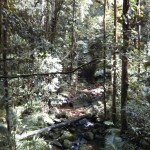 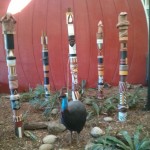 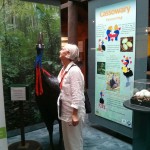 We spent 3 days in Daintree National Park, and much of the time we were looking to spot a Cassowary, a flightless bird almost extinct and now protected. There are signs everywhere to beware of them crossing roads, and clear instructions not to feed them (or any animals in the wild). Our first visit was to Mossman Gorge which is an absolutely world class visitor centre with high level walks through dense rainforest. The centre has been so well thought through and designed with such attention to detail that even I could find nothing to criticise. The paper cutlery holders have informative text about the local indigenous people and the training programme they run for hospitality students. The crockery is white and square (ordinary nowadays) but the water glasses have square bases to match – how happy was I about that!  The shop and art gallery also had well designed and well made products.
The middle photo above is a display in the cafe, and that’s a model cassowary in the front. It wasn’t until we went to the Discovery Centre the next day that we discovered how big cassowaries actually are! See photo on right. We read the instructions of what to do if you meet a cassowary – never turn you back on it, back away and put something big between yourself and the bird! Having also seen a video of one attacking a man, we decided to abandon our search. 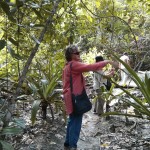 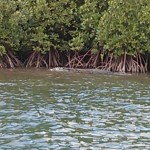 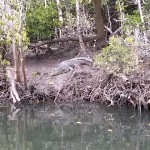 We opted for the ‘authentic’ experience with the only tour which is officially within the national park – it had to be the best, right? We arrived at the layby in good time and met Ernie, our guide, who set off at a pace down a narrow path into the mangroves with a cheery ‘let’s go’. Now I’d already read that crocodiles inhabit the edges of water, so I positioned myself very close to Ernie, confident he’d spot any crocs lurking beside the path. Up we go into a fairly small tin boat and before we even get settled down, he points to the two crocs at the other side of the river (middle photo). A male, 4m and a female about 3m. Now I know you can hardly see them with no camera zoom, just a slight bulge at the edge of the river, but you can see how close it was.
I asked Ernie how to tell the difference between a male and female. He replied ‘the male has a face like a dropped pie, like me’. So now you have a good picture of Ernie. But he was a very good croc spotter.  He spotted a baby croc, only about 12″ on a mud bank and it was so hard to see, we were very impressed with that.
On our way back we saw another female and stopped a while to watch her. She gave us a great pose, mouth wide open, to cool her brain. And I can say that’s about as close to a croc as I’d ever like to be, but it was an awesome sight. Without Ernie to take us back up the path, I decided to believe it that the spiky short mangrove growth wouldn’t be comfortable for a low lying croc, but went at a pace nevertheless.